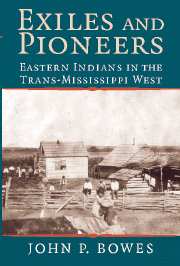 Exiles and Pioneers
Eastern Indians in the Trans-Mississippi West