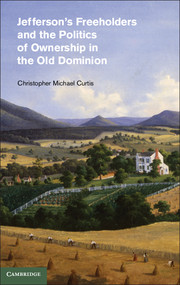 Jefferson's Freeholders and the Politics of Ownership in the Old Dominion