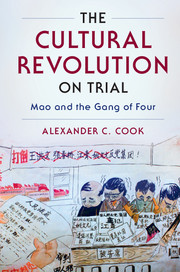 The Cultural Revolution on Trial
Mao and the Gang of Four