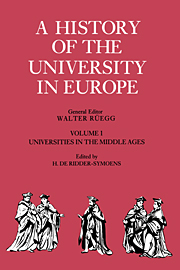 A History of the University in Europe

Volume 1. Universities in the Middle Ages

Part of A History of the University in Europe