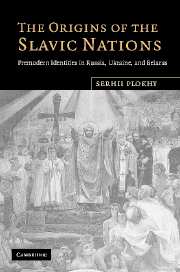 The Origins of the Slavic Nations
Premodern Identities in Russia, Ukraine, and Belarus