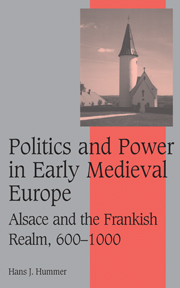 Politics and Power in Early Medieval Europe
Alsace and the Frankish Realm, 600–1000