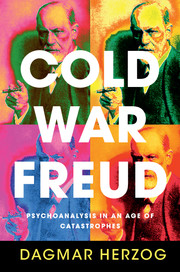 Cold War Freud
Psychoanalysis in an Age of Catastrophes