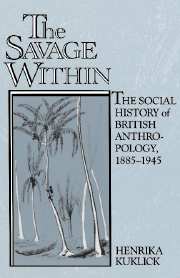 The Savage Within
The Social History of British Anthropology, 1885–1945