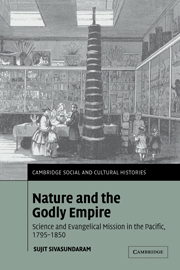 Nature and the Godly Empire
Science and Evangelical Mission in the Pacific, 1795–1850