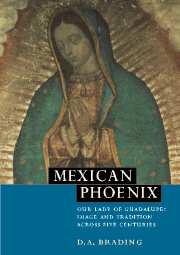 Mexican Phoenix
Our Lady of Guadalupe: Image and Tradition across Five Centuries