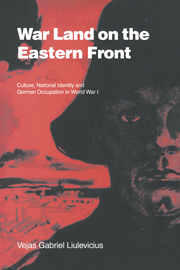 War Land on the Eastern Front
Culture, National Identity, and German Occupation in World War I