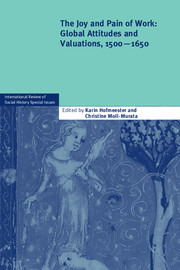 The Joy and Pain of Work
Global Attitudes and Valuations, 1500–1650