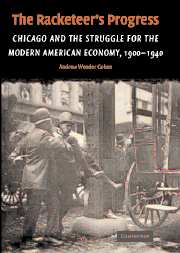 The Racketeer's Progress
Chicago and the Struggle for the Modern American Economy, 1900–1940