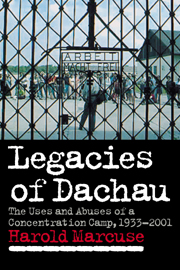 Legacies of Dachau
The Uses and Abuses of a Concentration Camp, 1933–2001