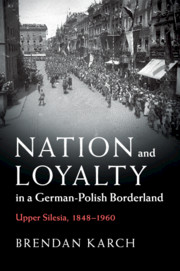 Nation and Loyalty in a German-Polish Borderland
Upper Silesia, 1848–1960