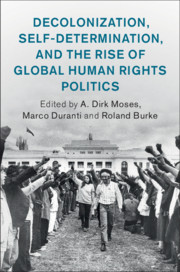 Decolonization, Self-Determination, and the Rise of Global Human Rights Politics