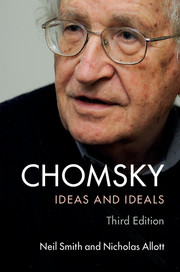 Interview with Neil Smith and Nicholas Allott on the third edition of 'Chomsky: Ideas and Ideals'