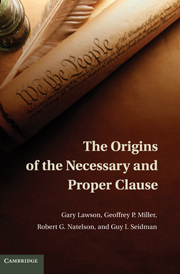 The Origins of the Necessary and Proper Clause