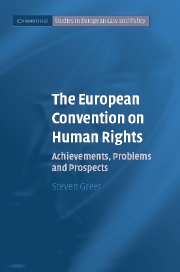 The European Convention on Human Rights
Achievements, Problems and Prospects