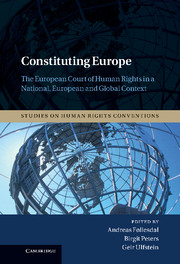 Constituting Europe
The European Court of Human Rights in a National, European and Global Context