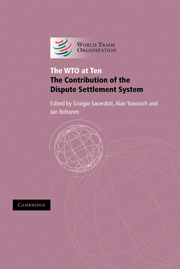 The WTO at Ten
The Contribution of the Dispute Settlement System