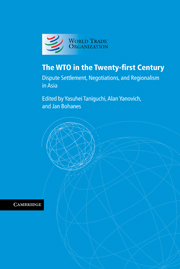 The WTO in the Twenty-first Century
Dispute Settlement, Negotiations, and Regionalism in Asia