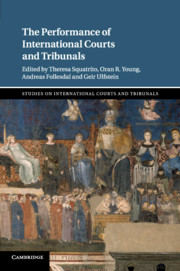 The Performance of International Courts and Tribunals

Part of Studies on International Courts and Tribunals