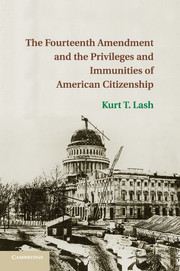 The Fourteenth Amendment and the Privileges and Immunities of American Citizenship