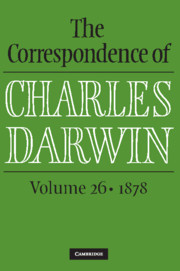 The Correspondence of Charles Darwin

Part of The Correspondence of Charles Darwin