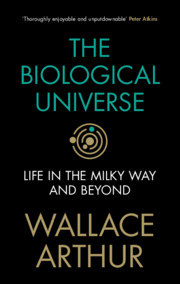 The Biological Universe
Life in the Milky Way and Beyond

Interview with Wallace Arthur on The Biological Universe

Are we alone in the Universe, or are there other life-forms ‘out there’? This book enables general readers to understand current endeavours to answer this question and the related one of ‘what kind?’