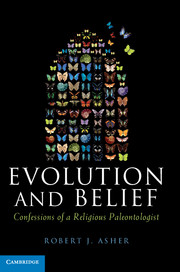 Evolution and Belief
Confessions of a Religious Paleontologist