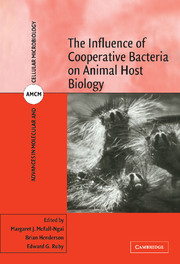 The Influence of Cooperative Bacteria on Animal Host Biology

Part of Advances in Molecular and Cellular Microbiology