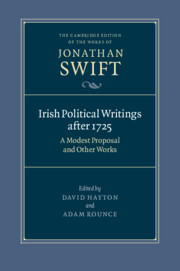 Irish Political Writings after 1725
A Modest Proposal and Other Works

Part of The Cambridge Edition of the Works of Jonathan Swift