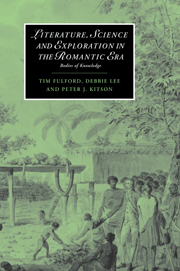 Literature, Science and Exploration in the Romantic Era
Bodies of Knowledge