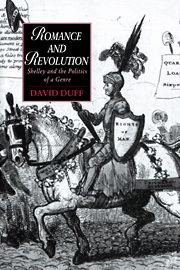 Romance and Revolution
Shelley and the Politics of a Genre