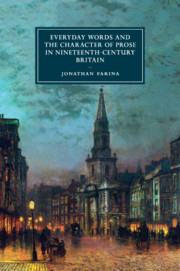 Everyday Words and the Character of Prose in Nineteenth-Century Britain