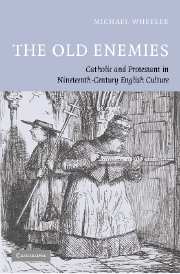 The Old Enemies
Catholic and Protestant in Nineteenth-Century English Culture