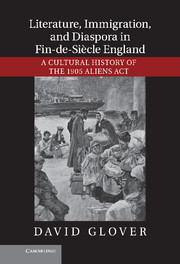 Literature, Immigration, and Diaspora in Fin-de-Siècle England
A Cultural History of the 1905 Aliens Act