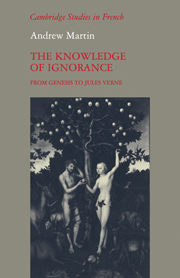 The Knowledge of Ignorance
From Genesis to Jules Verne

Part of Cambridge Studies in French