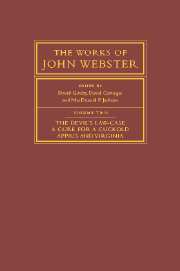 The Works of John Webster

Part of The Works of John Webster