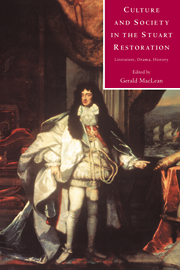 Culture and Society in the Stuart Restoration
Literature, Drama, History