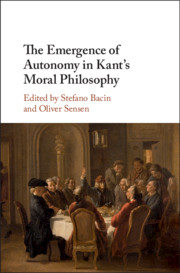 The Emergence of Autonomy in Kant's Moral Philosophy