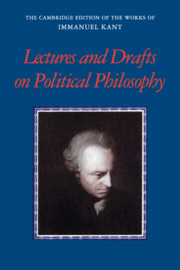 Part of The Cambridge Edition of the Works of Immanuel Kant