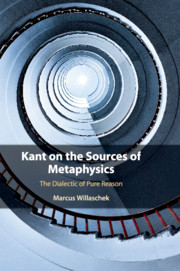 Kant on the Sources of Metaphysics
The Dialectic of Pure Reason