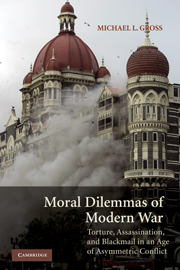 Moral Dilemmas of Modern War
Torture, Assassination, and Blackmail in an Age of Asymmetric Conflict