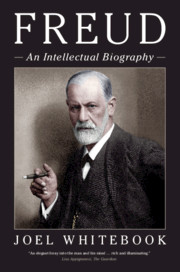 Price is not yet set

Price is not yet set
Paperback

Not yet published - available from July 2020Unavailable Add to wishlist

The Guardian - Cold War Freud and Freud: An Intellectual Biography review – the politics of psychoanalysis

Freud the feminist?: An interview with Joel Whitebook

Rethinking Freud: An interview with Joel Whitebook, author of 'Fread: An Intellectual Biography'