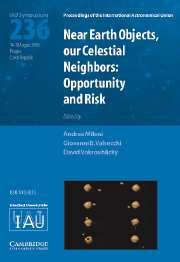 Part of Proceedings of the International Astronomical Union Symposia and Colloquia