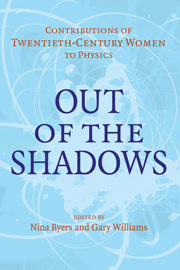 Out of the Shadows
Contributions of Twentieth-Century Women to Physics