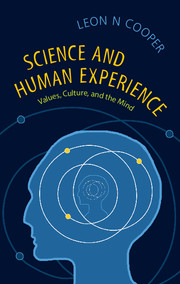 Science and Human Experience
Values, Culture, and the Mind

Leon Cooper, author of Science and Human Experience, on consciousness