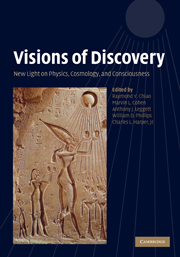 Visions of Discovery
New Light on Physics, Cosmology, and Consciousness