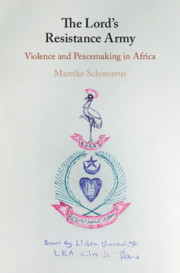 The Lord's Resistance Army
Violence and Peacemaking in Africa