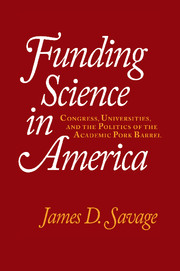 Funding Science in America
Congress, Universities, and the Politics of the Academic Pork Barrel