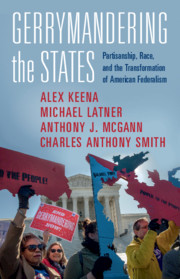 Gerrymandering the States
Partisanship, Race, and the Transformation of American Federalism