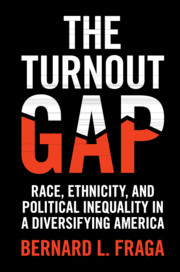 The Turnout Gap
Race, Ethnicity, and Political Inequality in a Diversifying America